The word bhakti is derived from the root bhaj, which means to render service.  The essential character of bhakti is service to the Lord, consisting of complete submission of the body, mind, and speech. In Bhakti-Sandarbha, Jiva Gosvami demonstrates in his analysis of Srimad Bhagavatam that through bhakti one experiences the Supreme Reality.

Jiva Gosvami explains that the Absolute possesses three types of potencies, namely internal, external (maya) and intermediate. Bhakti is the internal potency of the Lord and is superior to both the external and intermediate potencies. The external potency can exercise its influence over living being (jivas) but not over the internal potency. Therefore, the only way a jiva can be released from the clutches of maya is if one becomes surcharged with the internal potency. Action (karma) and Knowledge (jnana) are both products of material nature and are therefore incapable of relieving the problems of the jiva. Karma means to follow the duties prescribed by scripture, which can be enacted either with a material motive or selflessly. Jnana means to cultivate the knowledge of discrimination between spirit and matter. Karma, if performed meticulously, can lead one to heaven, where one can enjoy until the effect of one’s pious karma is exhausted, after which one must again take birth.  Thus karma cannot lead to God realization. Why, then, do the Vedas prescribe karma? It is a gradual process for those who are firmly attached to the fruits of their actions. If one engages in karma without any material motive, it will instill detachment in the performer, in which case karma becomes a stepping stone to the path of jnana.

Bhakti can be performed by all people, at all times, in all places, and under all conditions. This distinguishes bhakti from the processes of karma, jnana and yoga, which have restrictions. Bhakti, like the Lord, is supremely independent; indeed, if one has bhakti, then knowledge and detachment follow as concomitant effects.

Another feature of bhakti is that not only is it a means to an end, but it continues after perfection; thus even liberated souls perform devotion. Unlike jnana and yoga, one does not give up devotion after attaining perfection. Rather, one executes it more meticulously and without any motive. Bhakti is unobstructed, or apratihata, because it is beyond the concept of material pleasure and pain. Unlike karma and jnana, bhakti is blissful during its execution, and it gives ultimate bliss.

Jiva Gosvami explains that the grace of the Lord generally does not descend directly from the Lord. The reason is that the Lord is never touched by material miseries, which are a product of the gunas of prakriti. Consequently, His grace operates through the medium of perfected beings that are free from the influence of the gunas and are direct receptacles of the Lord’s grace. Although such perfected beings are also beyond material misery, they retain the memory of their previous sorrows, which they experienced before attaining the grace of the Lord.

This leads to the principle that the primary way one takes to the devotional process is through the association of saintly people who have attained the grace of the Lord. Saints are the bearers of the Lord’s grace in this world. Depending upon the power and the feeling of compassion of a particular saint, a person may attain bhakti through his association. But this too is a process. First, through saintly association, one acquires a taste for the object and process of devotion. This gives rise to sraddha, or faith, which is the stage preliminary to bhakti. When one has sraddha, he accepts a teacher through formal initiation and receives a mantra. 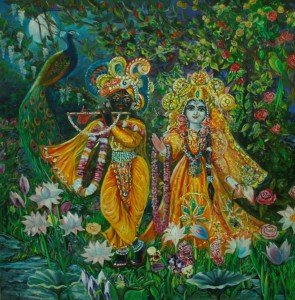 Jiva Gosvami’s teacher, Rupa Gosvami, has divided bhakti into three categories: sadhana, bhava and prema. Sadhana-bhakti is that which is realizable by the function of the senses. It is devotion in practice and is a means for attaining bhava-bhakti. But sadhana-bhakti is not a means in the ordinary sense. Generally, sadhana refers to some practice that is undertaken to attain a specific goal, known as the sadhya. In this general sense sadhana is merely a cause that gives rise to a previously non-existent sadhya, and once the sadhya is attained, the sadhana that was undertaken to achieve it becomes obsolete. Bhakti is not sadhana or sadhya in this sense. Bhakti is eternal and not manufactured by any combination of ingredients. Sadhana-bhakti qualifies the aspirant so that bhava can become manifest. Bhakti, manifesting in the form of internal emotions, is called bhava-bhakti and when it matures into the sentiments of love, it is called prema-bhakti, or devotion in love.

Sadhana-bhakti is of two types: vaidhi and raganuga. When a devotional activity is inspired solely because of the prompting of scriptural injunctions, it is termed as vaidhi-bhakti. No raga, or spontaneous attachment, exists in this case.

There are sixty-four angas, or limbs, of vaidhi bhakti described by Rupa Gosvami. Out of these, five are considered as most powerful: (1) associating with saintly people, (2) singing the Lord‘s name, (3) listening to the recitation of Srimad-Bhagavatam, (4) residing in the holy land of Mathura and (5) serving the deity with reverence. A little contact with any of these can give rise to bhava-bhakti. These limbs of vaidhi-bhakti engage the body, mind, and senses in the service of the Lord and are all highly effective in promoting the appearance of bhava-bhakti.

The second type of sadhana-bhakti is called raganuga, which means to follow the mood and attachment of the Lord’s eternal associates, known as ragatmikas. Ragatmikas have a natural raga, or deep absorption in the Lord manifesting out of love. Upon coming into contact with ragatmikas, such as by hearing about them, an adherent may develop a yearning to serve the Lord in the same mood as his model. When this yearning impels one to engage in devotional service, irregardless of scriptural injunction, it is called raganuga-sadhana. Raganuga follows the natural deep sentiments of the adherent and is therefore independent of all outward rules.

Vaidhi-sadhana-bhakti, on the other hand, depends upon the injunctions of scripture and is not necessarily performed with loving sentiment. The difference between these two practices is like the difference between a mother and a maid taking care of a baby. A mother has innate affection for her baby and thus takes care of the child out of her natural attachment, whereas a maid does not have such affection. She merely follows the instructions of her employer. This does not mean that raganuga devotees are averse to scriptural injunctions. The injunctions are meant for those who do not have a natural inclination for devotion. A raganuga devotee does not need them because he has a natural, spontaneous inclination to act favorably towards the Lord and to abstain from anything unfavorable.

The mature stage of sadhana-bhakti is called bhava-bhakti. Bhava is the dawn of prema, or love, which is the perfected stage of bhakti. It is a pure and internal feeling which softens the heart toward the Lord.

Exclusive attachment to the Supreme 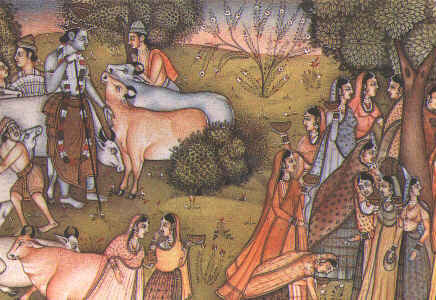 The third and highest stage of bhakti is called prema-bhakti. It occurs when bhava becomes intensified and condensed. Prema generates exclusive attachment to the Supreme. It can develop from both vaidhi as well as raganuga-sadhana-bhakti.

Priti, or devotional love for the Lord, is the highest manifestation of bhakti, and thus it is considered as the summum bonum of life. In priti there is absolutely no tinge of desire for personal gratification. A devotee’s love and surrender reach a level that he completely forgets himself while becoming identified with his beloved Lord.

Objects tend to move towards their source, just as water flows towards the ocean. If you burn a candle, the flame always goes up, towards the sun, as air continually moves towards the sky. However, if you throw an object up into the atmosphere, it comes back to the earth. It will be at rest only when it reaches it source, the earth.

Similarly, bhakti can be understood like a river during the rainy season, displaying intense power to reach its goal. Once a person realizes his identity, his mind runs towards the Lord. Since bhakti is the svarupa-sakti of the Lord, the soul is naturally inclined to the Supreme. The Lord is the source of living beings, thus their natural position is to be in union with Him.