Years ago, India was renowned for its rich culture, developed sciences and excellence in education. People from all over the world would travel to India to avail its wealth of knowledge. However, in the course of time, this heritage has dwindled, and the country is no longer the model it once was. Luckily, all of this knowledge is still available to us in our traditional literature. But people, even most Indians, are not aware of this knowledge, nor of its potential as a remedy for the ailments that plague our modern world.

Jiva Institute is committed to the preservation, digitization, and promotion of ancient Indian knowledge systems. It aims at helping the universal family of the world by providing education of the time tested wisdom of India.

Over five hundred years ago, Sri Chaitanya Mahaprabhu appeared in West Bengal, India, and preached the message of pure love of God. He was the founder of the Vedanta school called Acintya-bhedabheda, popularly known as Gaudiya Vaishnava Vedanta. Among his many followers, the six Gosvamis of Vrindavan were the most prominent.

Sri Jiva Gosvami was the junior-most among these six saints. He was one of the greatest scholars of Vedic theology and philosophy that India has ever produced. He wrote many books on philosophy, theology, aesthetics, poetics, and grammar.

Jiva Institute of Vaishnava Studies derives its name from Jiva Gosvami. The word “jiva” also means a living entity. Appropriately, Jiva Institute caters to the most important need of a human being, which is life-long happiness. In his writings such as the Sandarbhas, Sri Jiva Gosvami shows on the authority of Vedic scriptures how an individual, as well as society, can be cured of all the problems of life. But his writings are in Sanskrit, and so the knowledge which he propagated is not easily accessible. Dr. Satyanarayana Dasa, a scholar of Vedic philosophy, founded Jiva Institute of Vaishnava Studies to make these available to modern society.  He and his team of scholars are engaged in teaching, translating, commenting on and publishing the works of Jiva Gosvami and other acharyas of the Gaudiya school.

The Jiva Institute of Vaishnava Studies aims to present Vedic knowledge in a modern context so that those who do not have the time and facility to delve into the original literature can also benefit from it. 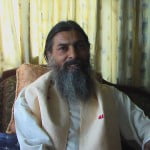 Mankind has always desired knowledge. Since creation, we have explored our world. We are ever in search of knowledge that will help us to find meaning and purpose in our lives. This search will continue as long as we exist. In the process of our explorations and learning, we have developed sophisticated technologies. However, we have not found the happiness that we had imagined technological advancement would give us. While developing our technology, we have missed an important link. There is a need to look beyond science and technology and supplement its knowledge.

Therefore, we need to explore other areas of knowledge that will make the understanding of life complete. One such body of knowledge is Vedic literature, which is holistic and universal. Vedic culture, with its bountiful heritage of wisdom, has always been one of the richest sources of enlightenment mankind has ever known. History is the witness that travelers, mystics, and men of letters from around the world have come to India over the centuries in pursuit of knowledge. However, because of social and historical reasons, this knowledge has been neglected for many centuries. Jiva Institute of Vaishnava Studies has been founded with the aim to study, practice, preserve and present Vedic knowledge. Discovering the wisdom in Vedic scriptures, and applying it appropriately to our lives is a continuous, joyful journey. Jiva invites you on this journey of exploration and discovery.

„Jiva Jivasya Jivanam“ (Jiva is the life of all living beings) 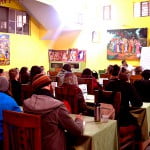 Jiva Institute has committed itself to rediscover this complete science of life, which helps in establishing a peaceful and harmonious society. Therefore Jiva Institute revisits major cultural motifs, studies indigenous social customs and religious rituals to uncover their deeper social significance. It places emphasis on a cultural resurgence for restoring the weakening human-to-human, human-to-animal, and human-to-environment relationships. For this, it engages the services of scholars, sociologists, historians and writers to bring to the fore the embedded traditional knowledge systems hidden in indigenous literature, arts, customs, and rituals. By doing so, it is our aim to establish greater meaning and direction in our lives as individual beings. Jiva Institute is committed to the preservation, digitization, and promotion of ancient Indian knowledge systems.

Jiva Institute of Vaishnava Studies aims to make the wisdom contained in ancient Sanskrit texts accessible for the world’s benefit. It maintains a well organized and comprehensive library containing more than 10,000 texts in Sanskrit, English, and Hindi. It also houses over 5,000 handwritten books and rare manuscripts in Sanskrit, Bengali, and Brajabhasha, which are written on handmade paper, mango leaves and tree bark, encompassing the entire spectrum of Vedic literature.  It has a special emphasis on Ayurveda, Jyotish, Music, Tantra, Sankhya, Yoga, Nyaya, Vaisheshika, Purva-mimamsa, Advaita-vedanta, Vaishnavism, Puranas, Itihasa, and Samhitas.  Our computerized library catalog contains a complete list of its collection to easily facilitate scholarly research. 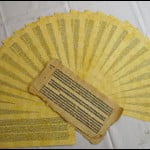 Jaya Devi at the library

There are thousands of rare and often original Vedic works, hundreds of years old, currently deteriorating throughout India. Many of these classical texts are the private libraries of individuals, stored without the proper resources for their maintenance. Worse yet, there are frequent reports of such libraries being burned or buried by the uninterested descendants of their original collectors. 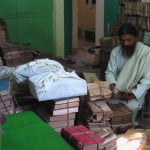 In response to this problem, the Indian Government has made some attempts to locate aged works and preserve them. Many texts have been microfilmed, laminated, and stored in library facilities. Although these attempts have been positive strides, a great need remains to locate, obtain, and preserve Vedic texts from an otherwise uncertain future.

Jiva Institute of Vaishnava Studies has established a preservation program to protect these books and make them available to the world. We hope you will help us find and preserve rare books so future generations can continue to have access to Indian literature. 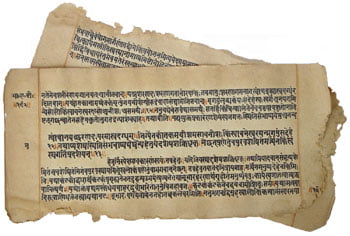 Manuscripts include works on Sanskrit Grammar, Drama, Tantra, Puranas, Itihasa, Jyotish (Astrology), Ayurveda, and Stotras. Many of these works are in fragile condition and we are preserving them to keep them intact. We plan to digitize these manuscripts and ancient texts to make them available to the public online.